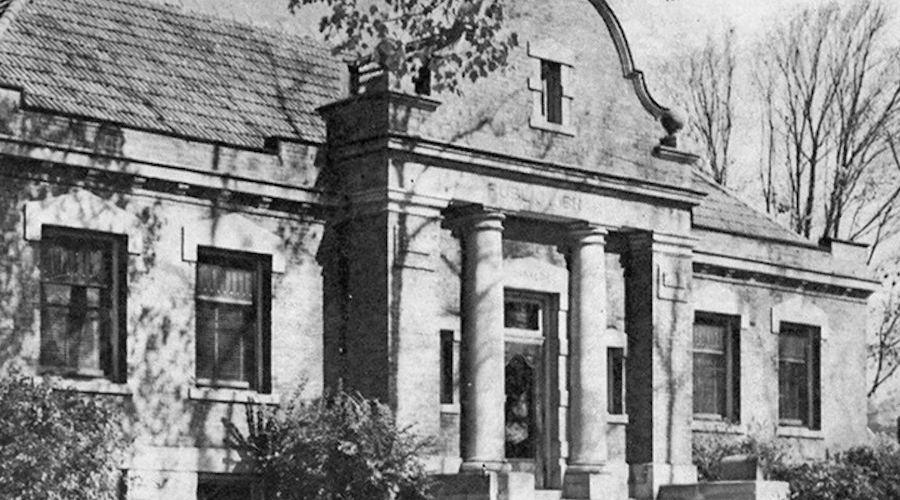 The History Of The Polo Public Library

The first Polo library was started in 1870 by Miss Franc Barber who began work while a teacher in the public school at Polo. Polo...

Connect With Polo's Past

The Polo Public Library's digitization of historic Polo newspapers was made possible through funding from the Blanche Jones Charitable Trust.

Connect With Polo's Past

The Polo Public Library's digitization of historic Polo newspapers was made possible through funding from the Blanche Jones Charitable Trust.

The History Of The Polo Public Library

The first Polo library was started in 1870 by Miss Franc Barber who began work while a teacher in the public school at Polo. Polo had a public library before Chicago had one; in fact, the Polo library was the first library west of Indiana. Miss Barber suffered cold and janitor hardships while pioneering in her library work.

J. H. Freeman was instrumental in starting the library. He talked to everyone he know about a library and as a consequence, a meeting was called in the old Town Hall. Eleven people contributed $100 each and at a second meeting on May 12, 1871, trustees were elected and the name “ Polo Library Association” was selected. The trustees discovered John Weller wished to dispose of his law office, which stood on the corner of Mason and Congress streets. They decided it was conveniently located – one block from the public school, on the main street, and yet far enough away to ensure quiet. Also, the cost of refitting it would be slight.

Furnishings consisted of a chunk stove; three bracket lamps and a smaller one for the librarian’s desk, the desk, and a reading lamp, with a dozen strong wood-bottom chairs. Mr. Woolhiser, the furniture man, donated the chairs.

As Miss Barber, the librarian, was teaching school in the daytime, W. W. Pierce offered to help with the cataloging and pasting rules in the books at night, preparing them for public use.

The rooms were opened to the public in December of 1871. The people were asked to contribute books and the housewives gladly cooperated; only too glad to get rid of old books. Patent books and out-of-date schoolbooks made up the majority of the contributions, but they counted as books and helped fill up the shelves.

There were no playgrounds or movies in those days; no places for youth to congregate. As soon as the lamps were lighted the chairs were filled with eager young readers that would stay as long as the librarian remained.

By the payment of $5 one could become a member and could draw books, subject to the rules. This enabled a member to take books home with him. Members could pay 50c a quarter in advance; non-members $1 per quarter in advance, or ten cents a week. This required the librarian to keep a journal and a daybook.

For the reading table Mr. Clinton furnished a copy of the POLO PRESS and solicited copies of other county newspapers. The Polo library had the first open shelves; that is, where people could select books from the shelves rather than from catalogs.

The books, of course, became very soiled, as they were not always handled with clean hands. Therefore, it became the duty of the librarian to make covers for the books from strong dark blue paper. The librarian had many duties. She had to haul the wood for the stove, the kerosene for the lamps, wash the windows, and keep the place neat and clean. She also had to mend all books and even sterilize books that had been handled by anyone with measles or scarlet fever.

One time a gentleman passing through giving temperance lectures, asked if he might sleep in one of the rooms upstairs. He was permitted to do so until the librarian noticed empty bottles being dropped past her window. It seems he had been drinking his exhibits. The gentleman was asked to leave “post-haste”!

One winter, funds were so low Miss Barber purchased fuel from her own funds and took in enough from “fines” to buy kerosene for the lamps.

On April 21, 1891 transfer was made by the trustees giving the library to the town, thus enabling it to be supported by taxes. The new board of directors: Alvin Joiner, J. H. More, J. L. Moore, E. D. Woolsey, L. F. Thomas, and George Murray, made many changes. A hard coal stove was purchased and the larger room carpeted. It then became the “ Buffalo Free Public Library.”

When the Carnegie gift came, in approximately 1904, the new building was erected in the same place our first library stood. It is still officially “ Buffalo Township Free Public Library.”

Voice of the Prairie: A Brief History of Polo, Illinois. Polo IL, 1957.